For Brian K. Smith, Director of Technology at IMCO Construction, innovation was key to overcoming many extreme challenges to deliver a major water treatment plant 10 months ahead of schedule.

As the first person to get a drone pilot’s license in Washington state, being ahead of the curve is nothing new to Brian, who says it's part of the DNA of his small construction firm. Being agile, experimenting with new technologies and focusing on construction quality control allows IMCO to punch above its weight-class and win more contracts than by relying solely on traditional approaches.

Brian and his team were in for possibly their most difficult project yet with the major water treatment plant, for which IMCO won an Autodesk AEC Excellence Award. While there was no shortage of challenges with this project, the IMCO team made the project a success through their hard work and dedication, and by being proactive in managing construction quality control every day.

Have to build on possibly the most remote build site in the state of Washington?

No problem. The Holden Mine Water Treatment Plant site was so remote it was accessible only by a 5-hour barge ride plus a 3-hour vehicle ride. Given the remoteness of the site, coordinating what materials would be delivered to the site -- and when -- had to be airtight. If anything was delayed, the ripple effect might add weeks to the already tight schedule.

These variables and more were built into the schedule kept in BIM 360 Field and BIM 360 Glue, which were updated daily and kept everyone working in lock-step. One of the many barge trips delivering materials to and from the construction site.

Don’t have a complete set of plans, and need to quantify what you have on site?

No problem. IMCO used drones to laser scan the area to draw up a complete set of plans. The team also used drones to get the quantities of all materials coming to and leaving from the site on a daily basis.

Need to coordinate amongst civil and mechanical engineers, designers, subcontractors and survey teams on a daily basis?

No problem. As part of their ongoing construction quality control initiative, the team needed to be able to analyze and resolve issues on the spot. This often involved coordinating beyond the construction team to include engineers, surveyors and other subcontractors. The team used software including BIM 360 Field, BIM 360 Glue for coordination, which was updated daily.

Being able to collaborate as needed across disciplines and making adjustments to plans on an ongoing basis played a huge role in helping IMCO turn out a virtually error-free project. Brian says, “Internal reviews were constantly going on to ensure plans would work in the field.” This is in contrast to a more traditional, siloed approach where, Brian says, “people could be stuck in a chain of command because they didn’t have the full picture.”

Brian says, “This was a very practical solution set that worked across all disciplines. Once we had their buy-in [...], and we [were] updating all the models on a daily basis, it really kind of flowed like clockwork.”

Don’t have space to prepare and assemble materials on-site?

No problem. The treatment plant is located in a national forest, so things like piping had to be pre-cut and staged off-site, then shipped on a barge and driven to the site to be fit together.

Think a construction firm can’t contribute to operations and maintenance of the project once complete?

Think again. Brian says, “We laser scanned the project after it was done on the inside, and plan to use the 3D model for operations and maintenance (O&M) as well.” This foray into O&M represents a new revenue stream for IMCO, made possible by embracing BIM processes in construction. Brian continues, “We have not begun to use the 3D model to link the asset data -- like maintenance logs -- with the 3D model, but that’s where they want to go.”

Have you had your already tight build window shrink even more due to a wildfire? The wildfire stopped work on the construction site for 6 weeks. Construction workers wait to be helicoptered out of the site.

Yes, this actually happened. The team was evacuated by helicopter, from what was the largest fire in Washington state history, putting the project on hold for 6 weeks. Despite the setback, the firm still managed to complete the plant project well ahead of schedule.

IMCO's water treatment plant project was a success thanks to the team's hard work and their commitment to construction quality control. Check out what BIM 360 can do for your construction project team!

Had a similar experience working in extreme conditions? Have you used drones for site layout? 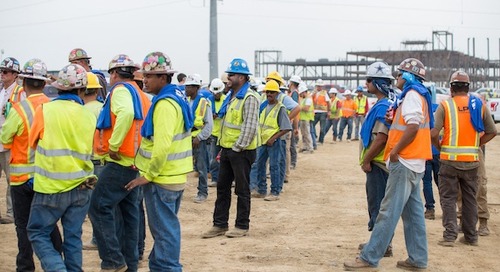 Calling All Contractors! Help with Construction Software is Here! 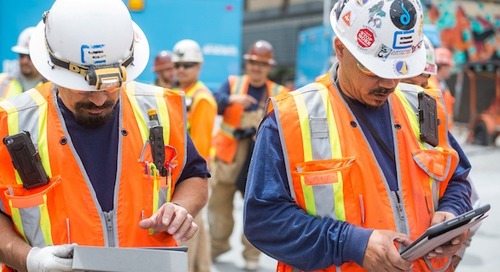